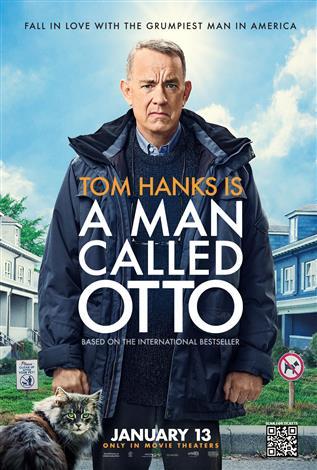 About A Man Called Otto

Based on the comical and moving No.1 New York Times bestseller, A Man Called Otto tells the story of Otto Anderson (Tom Hanks), a grumpy widower who is very set in his ways. When a lively young family moves in next door, he meets his match in quick-witted and very pregnant Marisol, leading to an unlikely friendship that will turn his world upside-down. Experience a funny, heartwarming story about how some families come from the most unexpected places. Directed by Marc Forster (Finding Neverland), A Man Called Otto stars Tom Hanks (Philadelphia, Forrest Gump, Cast Away), Mariana Trevino (Club the Cuervos), Rachel Keller (Fargo) and Manuel Garcia-Rulfo (The Magnificent Seven). The screenplay is written by Academy Award nominee David Magee (Best Adapted Screenplay, Life of Pi, 2012; Best Adapted Screenplay, Finding Neverland, 2004) based upon the best-selling novel "A Man Called Ove" by Fredrik Backman. The film is also based on the Swedish film written and directed by Hannes Holm. The film is being produced by Rita Wilson, Tom Hanks, Gary Goetzman and Fredrik Wikstrom Nicastro.

........ Purchase a ticket to A Man Called Otto for your chance to win 1 of 5 annual CineClub memberships!

........ No purchase necessary. Contest begins on Thursday December 15th, 2022 and ends at 11:59PM E.D.T. on Tuesday January 31st, 2023 (the "Contest Period"). Contest is open to Scene+ members who are legal residents of Canada (excluding residents of Quebec), who are at least fourteen (14) years of age as of the start date of this Contest. To enter purchase a ticket at cineplex.com or through the Cineplex app to see A Man Called Otto during the Contest Period. The odds of winning depend on the total number of eligible entries received during the Contest Period. There is a total of five (5) Prizes of one-year CineClub memberships to be won. Approximate retail value of each prize: $120 CAD. Skill-testing question required. See the full contest rules for details: https://www.cineplex.com/news/a-man-called-otto-contest